This one is my favorite.

Can you guess the output of this simple console application:

One would expect to see numbers from 0 to 9 but here is the actual output of the app: 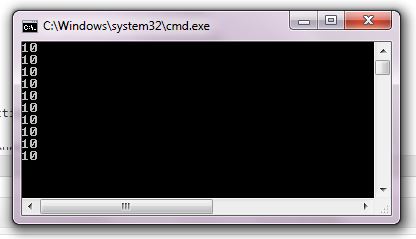 It turns out its like that by design. What you have there is a Closure over the loop variable. And closures in C# are done around variables and not around specific values of those variables – so that means that lambda expression gets to use the actual reference to the closed variable.

In first loop we iterate increasing the counter variable from 0 to 9 and then use it in the lambda expression. That means each lambda gets its access to the counter via closure.

So at the end of this first loop, value of the counter is 10 (its 10 because we used post-increment operator: counter++, so in last iteration of the loop we increase counter to 10 and then check if its <10 and we see its not, so we exit the loop).

Afterwards we start executing those actions we created in first loop, and they all have a Closure over this same variable counter – which has value of 10 and therefore each action prints out its current value 10 to the console.

So it works as expected, once you know what to expect. 🙂

And this is really common mistake C# developers make.

How to fix it?

That way, closure will each time be done around that copy variable that has current value of counter at that moment of execution, and this local copy value stay that way and will not be changed afterwards by the loop.

Later when the actions are executed (in the second loop), each will use their own closure around copy of the counter and therefore each will have its own different, expected value.

Here is the code that works as we expect:

As you see we create a copy of counter called counterCopy and pass this to the lambda expression each time.

Although this seems like old news if you knew it, there are many C# developers that are not aware of this behavior (or tend to forget it from time to time) so make sure to spread the word and always remember it.

By the way, the C# team is changing this in C# version 5 to work as one would expect but until then we just need to copy those loop variables manually 🙂